The Flir One Pro is a small, compact USB thermal imaging camera that I use to help spot insulation problems in houses, as well as leakage around doors, and potential moisture issues as well. 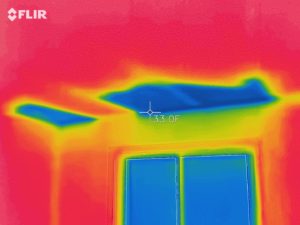 As you can see in this photo, there is a problem with this ceiling. It looks like it is missing insulation in those 3 cavities, It's a simple fix that would potentially save problems later on, such as moisture condensation / freezing in the attic. 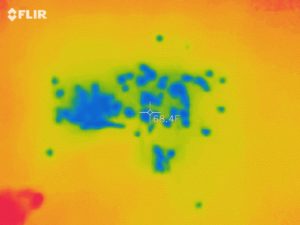 In this second picture, you can see someone went crazy with the drywall screws. Not sure why, but they are there.

In this third picture, this camera gave us the answer as to why the hot and cold were reversed at the bathtub. The plumber connected this tempering valve incorrectly.

Now for the problem, or I should say problems. There are a couple problems with this camera and the first is that it drains the battery when it's just sitting in the pouch. On many occasions, i have charged it up and let it sit for a week in between uses. Then when I go to use the device, it's dead. I thought maybe I forgot to charge it. But after it happening so many times, it's just a flaw in the camera. It drains the battery even when it is not running. My guess is that after 3 days, it's dead.

Most of the time I can run the unit off a battery pack and keep using it. Until it doesn't work. That's the next problem.

It's dead. It won't take a charge, and it won't work off the external battery bank. Luckily it has a warranty, a 2 year warranty. The first unit I bought (april 5, 2018) had to be replaced less than a year later because it wouldn't boot up (december 3, 2018). That unit lasted 8 months.

The replacement unit (my 2nd unit) died in February 2019. That unit lasted 3 months. It, too, was replaced by Flir.

The 3rd unit did better. It lasted 14 months and died the same death in April of 2020. Unfortunately for me, my 2 year warranty ran out a couple weeks ago. It has a solid red light when I plug it in, and that's all it does.

The official reset procedure is to connect it to a charger for an hour until it is fully charged, but you wouldn't know that as the lights don't blink appropriately.

Next launch the application on the phone without the camera being connected.

Lastly turn on the camera and wait until the led flashes green and then connect it to your phone. In my case, it never gets to the green flashing part.

Some people are speculating that the battery gets so low that it won't take a charge from the usb port. They claim holding down the power button while it's charging allows it to trickle charge the battery so that takes a small charge. I tried it, and it doesn't work on my camera. I had the button taped down for about 2 hours, and plugged into a charger. The light was solid red the whole time. Now, when I unplug it, it stays red and doesn't do anything. I suspect the light will stay on until the battery is depleted.

This product is a great disappointment.